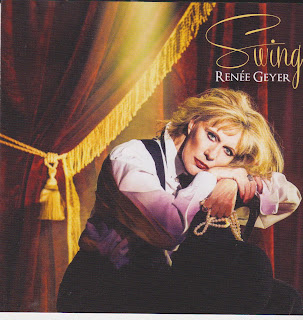 Swing is the new album by legendary Australian singer Renee Geyer. this was recorded @ Alan Eaton's and Sing Sing Sing Studios in Melbourne and among the songs that on this album are 2 new versions of her 70's hits Say I love You and It's A Man's Man's World as well as other songs including I Got Rhythm, Alfie, Baby Please Don't Go. It's an BRILLIANT album with great songs and great singing by Renee Geyer which she still sounds great after all these years. This was was produced by Renee Geyer and Paul Williamson with Dave Palmer and among the musicians who played on the album were Paul Kelly who sang on Comin Home Baby, Robert Rigby was the executive producer, an 12 horn section and an 6 piece band play on the album. This album has done very well which it's currently @ number 22 on the Australian charts and I hope it gets in the top 10 which if Russell Morris has an top 10 hit album so can Renee Geyer and this album is an must for any Australian music fans as well as Renee Geyer fans. I am giving 5 stars and it's in the shops now

Popular posts from this blog 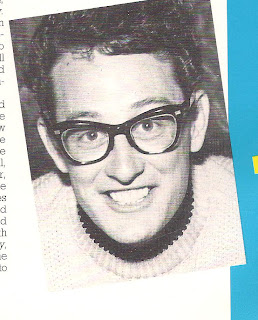 this is another new segment on Rockin Luke as we look at the rock'n'roll tours of Australia from the 50's,60's and 70's from the well known tours and to some that don't get a lot of mention so let's start off with the Buddy Holly tour of Australia in 1958.
Buddy holly & the Crickets/Jerry lee Lewis/Paul Anka/Jodie Sands/Johnny O'Keefe and the Dee Jays- The Big Show
promoter-Lee Gordon
Buddy Holly and the Crickets-Buddy Holly,Jerry Allison & joe B Mauldin
Jerry lee Lewis
Paul Anka
Jodie Sands
Johnny O"Keefe and the Dee jays- Johnny O'Keefe , John"Catfish" Purser, dave Owens, Johnny greenan, Lou Casch and Keith Williams
Dates-
Sydney Stadium January 30th 1958
Newcastle January 31st
Sydney Stadium February 1st
Cloudland Ballroom Brisbane February 3rd
West Melbourne Stadium February 4th and 5th
This tour in 1958 was the only Australian tour that Buddy holly ever did as well as the tour of the UK an month later as he would be killed in a plane …
Read more

July 26, 2019
Tonight I went to the Balmoral Cinema with my Mum where I saw the movie The White Crow which it's based on the true story about legendary Soviet ballet Dancer Rudolf Nureyev. It's 1961 and ballet dancer Rudolf Nureyev (Oleg Ivenko) along with the Kirov Ballet Company are on an trip to Paris which it's his first time travelling outside and he gets to revel and enjoy the culture as well as the sophistication and the artistic offerings that the city. But also he is in getting watched by the KGB as well as the other dancers and at the airport he is in a situation where he has to choose. It's an FANTASTIC movie as well as interesting with Top and Fantastic acting by Oleg Ivenko, Ralph Fiennes who also produced and directed it, Adele Exarchopoulos as Clara Saint, Chulpan Khamatova and Luis Hoffman. Besides from Ralph Fiennes the other producers were Carolyn Marks Blackwood, Francois Ivernel, Andrew Levitas and Gabrielle Tana and David Hare did the screenplay. It's an am…
Read more 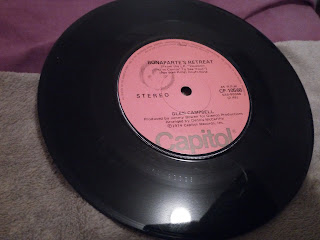 Bonaparte's Retreat by Glen Campbell was an cover of an fiddle song that goes back to 1800's and maybe before that which in 1950 Pee Wee King had an country hit with it that went to number 10 in the USA country charts but before that in 1937 William Hampton Steppan American violinist recorded an version of it for Alan Lomax an American ethnomusicologist. After Pee Wee King Kay Starr an American singer who would have an big hit in 1959 with the Rock and Roll Waltz did an version of Bonaparte's Retreat which went to number 4 in the USA late 1950 and Billy Grammer who had an big hit with Gotta Travel On had an number 50 USA hit with it in 1959 and also Australian singer Merv Benton did an version of it in 1967 as a b side to Do It Again A Little Bit Slower. Glen Campbell's version was released in July 1974 which went to number 3 in the USA country charts, number 42 in the USA pop charts, number 4 in Australia and on January 3rd 1975 it number 1 on the Brisbane charts …
Read more